Skee Ball is an arcade game seen in "Arcade Mania" played by Amethyst and Onion.

Skee Ball is a game where the objective is to gain as many points as possible by rolling balls down a lane and into holes of various sizes for differing point amounts. Players are awarded tickets depending on the number of points earned. The game is similar to bowling, although it is played on an incline rather than a level surface, and does not use pins. It is located at the Funland Arcade.

The game consists of multiple white-rimmed holes on a purple ramp, with a black net on either side of it. The ramp has magenta blockades on both sides to prevent the balls from going off the ramp.

When Amethyst is tempted to win tickets, she cheats by sitting on top of the machine and tossing the balls into the central hole to earn the highest number of tickets.

Skee Ball is seen again at the Funland Arcade.

Skee Ball is played by Steven and an amnesiac Amethyst, with Steven hoping that playing Skee Ball will help in recovering Amethyst's memory. They end up cheating the way Amethyst did in "Arcade Mania", with them sitting on the top of the machines and tossing balls into the central hole. 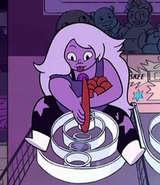 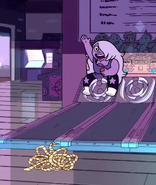 Retrieved from "https://steven-universe.fandom.com/wiki/Skee_Ball?oldid=1967205"
Community content is available under CC-BY-SA unless otherwise noted.