Issue 4
Slug Monster is a Corrupted Gem that appeared in Issue 4 of the Steven Universe comic series. She was seen attacking Beach City and kidnapping its residents.

The Slug Monster resembles a giant green sea slug. She has a long, predominantly green, body that has three pairs of green legs. One pair of club-like antennae is seen on her head with two large eyes below them. Another pair of bent antennae is found near the end of her body. On her back is a long strip of purple where sacs that can hold smaller creatures are located.

The Slug Monster is seen attacking Beach City and kidnapping the townspeople. Lion is able to save the townspeople by teleporting them to safety before the Crystal Gems finish her off.

Steven and Connie talk about the attack, mentioning that during the Slug Monster's rampage she consumed the entire public library. 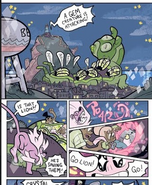 Add a photo to this gallery
Retrieved from "https://steven-universe.fandom.com/wiki/Slug_Monster?oldid=1967303"
Community content is available under CC-BY-SA unless otherwise noted.