"Steven's Bike" was first introduced in the episode "Bubble Buddies".

Steven uses the bike in an attempt to impress Connie with some "radical" moves. He struggles to ride it through the sand to where she is reading next to the cliff. She does not notice him until he topples over and runs away embarrassed.

Steven demonstrates Lion's mane dimension to the Crystal Gems by retrieving his bike that he had stored in there (among countless other handy items).

The bike is seen on the hill in Lion's dimension with the rest of Steven's things.

"Bismuth"
Add a photo to this gallery 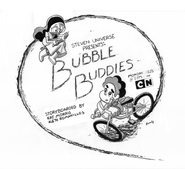 Retrieved from "https://steven-universe.fandom.com/wiki/Steven%27s_Bike?oldid=1863206"
Community content is available under CC-BY-SA unless otherwise noted.