"Steven's TV" is a television located in the Beach House in Steven's loft. It first appeared in Gem Glow and has made several appearances since.

Steven's TV was first shown in the background of Cheeseburger Backpack. It has made appearances in other episodes since, notably "Rose's Room", "Steven the Sword Fighter", and "Cry for Help".

It's located in his loft in the Beach House. He mainly uses it to play his video games and to watch his favorite TV shows, like "Crying Breakfast Friends", and movies. He shares it with the Gems on occasion and lets them use it as well.

It was also used as a form of communication during Cry For Help, when Peridot used to Communication Hub as a way to contact Homeworld by means of TV waves.

It was apparently destroyed in "Back to the Barn" when Peridot destroyed it looking for drill parts, and hasn't appeared in other episodes since, likely because the Gems haven't been spending any on-screen time at the temple since that episode.

It is a medium sized standard definition television with AV attachments. It has a VCR and DVD player installed. 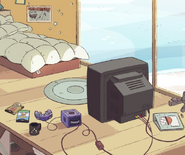 Add a photo to this gallery
Retrieved from "https://steven-universe.fandom.com/wiki/Steven%27s_TV?oldid=929986"
Community content is available under CC-BY-SA unless otherwise noted.