Steven Universe Wiki
Register
Don't have an account?
Sign In
Advertisement
in: Locations, A to Z, Gem locations

Temple of the Frozen Fragment and Scorching Shard

Temple of the Frozen Fragment and Scorching Shard

Issue 15 (2017)
The Temple of the Frozen Fragment and Scorching Shard is a Gem Location that first appeared in Issue 15 (2017). It is currently unknown what the temple is used for. It houses two volatile gems placed on top of an Unknown Gem Statue's left and right hand palms inside the temple.

The temple is located above a short mountain or hill near a warp pad that leads to a long stairway above. Its outer appearance resembles a Greek temple. Garnet compared the two gems to the Shooting Star that they are alike, but in a different way. The two gems that are housed inside the temple are temperature sensitive. The bright blue gem on the palm of the statue's right hand is said to be "The Frozen Fragment", while the red one on the left hand's palm is "The Scorching Shard" according to Sapphire. Ruby retrieved the red gem while Sapphire retrieved the blue one, and they bubbled it afterwards. 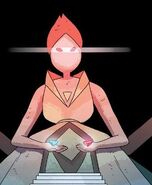 Statue in Fire Mode after Ruby dropped the Shard