The Cluster is a massive Cluster Gem buried inside of the Earth's mantle that was first mentioned in "Jail Break" and first seen in "Gem Drill". It is composed of millions of Gem shards and, in its emerged form, would be larger than the Earth. It assisted Steven in bubbling itself in "Gem Drill" and remains dormant in the Earth's mantle. It Was Sent To Earth Once It Forms All Life On Earth Will Be Gone.

At some point during the Rebellion, Homeworld Gems no longer saw Earth as a viable colony. Instead of exploiting the planet for its resources like originally intended, Homeworld Gems planned on planting a geo-weapon inside of the Earth itself with the intent of destroying the planet and any remnants of the Crystal Gems.

The shards of fallen Gems from the ongoing war were collected by Homeworld Gems and experimented upon, forcibly fusing the shards together into Cluster Gems. Once enough experimentation was completed, Homeworld Gems fused together millions of Gem shards. This massive assortment of Gems was then planted into the Earth's mantle at the Beta Kindergarten. When this beast, known as the Cluster, takes on its physical form, it will be much bigger than the Earth itself, completely ripping the planet apart inside-out. As implied by Yellow Diamond and Peridot, Homeworld can then used the Cluster as a weapon to destroy other worlds.

The Cluster was first mentioned by Peridot in "Jail Break". Arriving on Earth and checking on it was the primary objective of her mission, with Jasper as her escort and Lapis Lazuli as her informant.

Details were later mentioned in "Catch and Release", when Peridot was cornered and finally captured by the Crystal Gems. When Steven released her, she reveals that the "emergence" of the Cluster would be a catastrophic event that would destroy everything on Earth.

Peridot explains that after Homeworld no longer saw Earth as a viable colony to mass-incubate Gems, they started doing experiments with the Gem shards, fusing them together to create an artificial fusion as a type of "Gem geo-weapon". She reveals in the Prime Kindergarten Control Room that the forced Gem fusions they were fighting were prototypes for the Cluster, a giant forced Gem fusion at the core of Earth composed of millions of Gem shards. She mentioned that it would be much bigger than Earth if it emerges and takes its physical form, and will destroy the planet once it does so.

"Back to the Barn"

Peridot reveals the Cluster's location through the Diamonds' computer in the Moon Base. As shown, it is located beneath the Beta Kindergarten, and was embedded deep in the mantle approximately 2,500 units down relative to the Barn.

After embezzling the Diamond Communicator, Peridot argues with Yellow Diamond to terminate the Cluster so that they would not sacrifice the organic life for such a Gem geo-weapon. Yellow Diamond replies, "I want my Cluster, and I want that planet to die. Just make that happen." She also orders Peridot to let the Cluster grow undisturbed.

The Cluster tries to emerge in this episode and causes some tremors. Peridot recognizes these tremors and says that the Cluster is causing them, but the other Gems believe that Malachite is causing them. After they defeat Malachite and force her to unfuse, the Cluster causes an earthquake on Mask Island, which results in Jasper falling into a fissure.

Earthquakes begin rocking Beach City, indicating that the Cluster is only hours away from taking form. Steven and Peridot drill deep into the Earth where the Cluster is located but are unable to pierce the surface of it. As Peridot tries to destroy it, Steven sees faces and hears the voices of the Gem shards comprising the Cluster, and starts to talk to it as he falls unconscious. He convinces it not to form and, instead, to bond with itself. The Cluster begins to take form uncontrollably, however, so Steven attempts to bubble all the Gem shards. He eventually wakes up and notices the Gem shards inside the Cluster are bubbling each other. Steven finishes it off and merges all the small bubbles into one immense bubble, completely encasing the Cluster and preventing it from destroying the Earth.

When Steven goes to the Big Donut, Sadie says that Steven missed all of the earthquakes, referencing those that were caused by the Cluster.

The Cluster is mentioned briefly by Blue Diamond to Greg, who also mentions that Earth does not have much time left before it is destroyed by the Cluster, not aware of its bubbling.

The Cluster is mentioned briefly by Yellow Diamond, who asks Sapphire if it has already emerged, to which the latter replies it has not.

One of the first views of the Cluster.

The Cluster attempting to form. 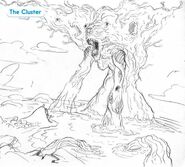 Cluster concept art if it was formed. 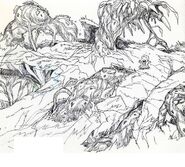 Cluster emerging
Add a photo to this gallery
Retrieved from "https://steven-universe.fandom.com/wiki/The_Cluster?oldid=1572493"
Community content is available under CC-BY-SA unless otherwise noted.