Steven Universe Wiki
Register
Don't have an account?
Sign In
Advertisement
in: Locations, A to Z, Businesses,
and 2 more
English

"Love Letters" (mentioned)
The Crab Shack is a seafood restaurant in Beach City that is first introduced in "Fusion Cuisine" and is later referenced in "Love Letters." It is separate from competing Beach City restaurant "The Original Crab Shack," which appears in "Laser Light Cannon" and "Onion Trade." It serves breadsticks, though it is unknown whether they are unlimited or not.

The Crab Shack has a marina aesthetic and layout, with main back deck for outdoor seating that is connected to a dock. It has two stories of indoor space, and a take-out order window facing the water. Inside the restaurant, several taxidermied fish are displayed on wall mounts on either side of the restrooms.

The Crab Shack is located on the very outskirts of Beach City, on a less frequented part of the beach in the shadow of the Beach City Water Tower. It is also located just past Beach City Funland.

Connie and her parents, Dr. Maheswaran and Doug Maheswaran, have dinner with Steven and his "parents", Greg and Alexandrite (later revealed to be the fusion of Garnet, Amethyst, and Pearl) at the Crab Shack.

Jamie asks Garnet to "dinner, or maybe lunch" at the Crab Shack in a letter. 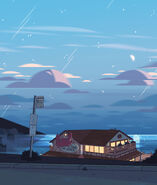