The Hourglass (or the "Glass of Time") is a gem artifact that enables its user to travel back in time. It was introduced in the Pilot as an artifact that the Crystal Gems have been protecting for one thousand years. It made its canon debut in "Steven and the Stevens" as an artifact they had not yet found. If it is used incorrectly, it can create alternate timelines.

The Hourglass' primary ability enables the user to travel to a specified point in time.

In the Pilot, it is revealed that once it has been first activated, it will lend its power only to the individual who used it. In addition to this rule, every use following its initial activation must be for a similar purpose (under the same rule, the user can only travel to the exact moment required). For example, Steven's initial purpose is to improve his comebacks in conversations, so from then on he could only use the Hourglass to return with a better comeback.

In "Steven and the Stevens", the limits established in the Pilot do not apply and remain unconfirmed. The Hourglass can apparently allow the user to travel forward in time as well. This allowed Steven to accidentally foresee the dry ocean that is later seen in "Ocean Gem".

Steven activates the Hourglass four times in the Pilot. It is activated following Steven's conversation with Lars. After leaving the Big Donut, he is offended by Lars' comment on Steven "not being a hot girl". With the Hourglass in his pocket, Steven thinks of a good comeback and wishes he would have said that. The magical item takes him back to that exact moment, but he is embarrassed again after Lars calls him a "big joke". Steven repeats the process and leaves.

The activation of the Hourglass attracts a huge Electric Skull. Garnet, knowing they might not win, calls Steven a "buttface". He is at first confused by the unforeseen insult, but during the fight realizes that Garnet made the comment so Steven would be able to use the Hourglass and travel back in time to make a comeback. Steven knows the attack patterns of the Electric Skull when he returns to the beginning of the fight. They can defeat the skull by pinning its multiple arms with the giant metal donut from the roof of Big Donut.

After the fight, Steven yells out loud that he wished he had told Pearl he would save all of their lives after she called him a clown, but immediately regrets it as the Hourglass takes him back in time yet again. This angers Steven into breaking the Hourglass. However, it still exists in that timeline as Amethyst hasn't given it to him yet.

The Hourglass makes its canon appearance in the episode "Steven and the Stevens". It is kept inside the Sea Shrine, which only appears once every 100 years after an hourglass is taken. Despite Amethyst taking the wrong hourglass and triggering a flood intended to empty the spire, Steven manages to collect the actual Hourglass and is safely warped back to the Crystal Temple with the Gems.

Later, by unintentionally wishing to stop his dad from allowing Yellowtail to back his boat into the car wash, Steven discovers that the Hourglass is capable of sending him back in time. However, after his wish sets off a chain of events with worse consequences than there were previously, he wishes to stop his past self from wishing. This results in the disruption of timelines following the multiverse theory, allowing Steven to interact with Stevens from alternate timelines.

Steven and his multiple selves' shenanigans eventually snowball into complete chaos, battling each other through moments of "Gem Glow", "Rose's Room", and "Ocean Gem", ending up at the moment he first takes the hourglass. Steven stops his clones from fighting and then destroys the hourglass, which results in the deletion of everything else not of the current timeline, leaving only one Steven.

The Hourglass appears in a montage of Steven recounting his previous traumatic experiences when he was younger. 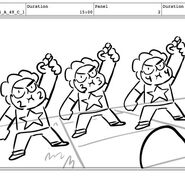