"The Mirror" is a magical, Gem-powered item that first appears in "Mirror Gem." Steven is given the mirror by Pearl to learn about Gem history and later discovers that a Gem, Lapis Lazuli, is trapped within the mirror. It ceases to continue functioning after Steven pulls out Lapis Lazuli's gemstone to free her. The mirror is discarded afterwards.

An ornate design of silver-blue metallic material comprises the backing and handle of the mirror; Lapis' cracked gemstone was affixed to its back. The mirror itself is a round piece of blue reflective glass with a faint contour of an octagonal gemstone etched on its surface.

Pearl gives the mirror to Steven so he can learn about Gem culture and history; it is able to show its viewer any event it was present for since its creation. Pearl tells Steven they found the item at the Galaxy Warp. As Steven and Lapis begin communicating, she tells him she was purposely imprisoned within the mirror. Steven releases her by removing the gemstone from the back, shattering the mirror. The Crystal Gems' potential prior connection with Lapis and the mirror is currently unknown.

A model sheet of various scenery reflected within the mirror.
Mirror 2.jpg 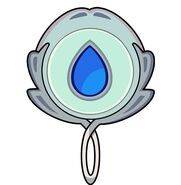 Add a photo to this gallery
Retrieved from "https://steven-universe.fandom.com/wiki/The_Mirror?oldid=381638"
Community content is available under CC-BY-SA unless otherwise noted.