Steven Universe Wiki
Register
Don't have an account?
Sign In
Advertisement
in: Objects, A to Z, Books, Media
English

The No Home Boys

The No Home Boys is a series of novels created by Dustylegs Jefferson.[1] It was first seen in the episode "On the Run".

The series of books revolves around two boys who have no home, that live on their own and travel the "countryside".

The No Home Boys: On the Run book features the No Home Boys being chased across the country by "the very fear resting within themselves."

No Home Boys #2: Case of the Pilfered Pegasus 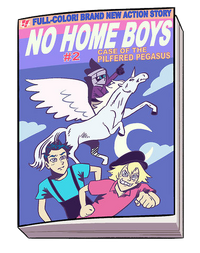 No Home Boys #2: Case of the Pilfered Pegasus is a graphic novel adaptation of the fictional No Home Boys book franchise. It is first seen in the episode "On the Run" and featured on Ronaldo Fryman's blog, Keep Beach City Weird.

Steven has stated that it was a "disastrous graphic novel adaptation."

Ronaldo gave the book a C+, saying, "Some fans turned up their noses at the new adventures of the No Home Boys. The old series was a down to earth travelogue - a gritty portrayal of growing up during the Great Depression. The new series was full of magic demons, talking animals and ninjas. Sure it didn’t have the same campfire charm, but the expanded “Hoboverse” had much more character development and backstory for readers to sink their teeth into."[1]

Steven's appreciation for the book series inspires him and Amethyst to set out on their own journey across the countryside.

A book from this series in seen in Amethyst's Room.

Pearl suggests that they re-read The No Home Boys after Steven fails to go to Little Homeschool for work. 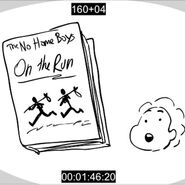