Steven Universe Wiki
Register
Don't have an account?
Sign In
in: A to Z, Episode galleries
English

< The Return
View source
watch 01:23
Wiki Targeted (Entertainment)
Do you like this video?
Play Sound 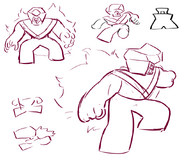 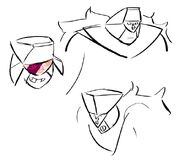 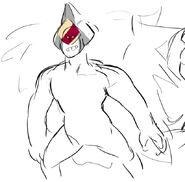 [PLOT] [02:08] After the first sonic disturbance from the Gem Warship, the glass windows of the shops along the boardwalk are shattered, but when they are shown again later, the windows are unbroken.

[PLOT] [10:31] When Jasper picks Steven up, she uses her right hand. In the next shot, she is seen grasping him with her left hand.

[DESIGN] [02:03] When Mayor Dewey's van is out signaling everyone to evacuate, the nose of the head on top of the van is not colored in, or is the same color as Mayor Dewey's skin, instead of red.

[DESIGN] [02:48] When Garnet talks to Steven after giving him the megaphone, Ruby's gem appears on her right hand instead of Sapphire's.

[DESIGN] [05:09] When Steven lifts up his hoodie while convincing his dad that he is the only one that can save the Gems, his shirt is not seen when in fact it should be visible underneath his hoodie.