Steven Universe Wiki
Register
Don't have an account?
Sign In
Advertisement
in: Objects, A to Z, Books,
and 2 more
English

"Open Book"
The Spirit Morph Saga is a series of four books, introduced in "Marble Madness". The series is a personal favorite of Connie's, and after she introduces it to Steven, she allows him to borrow her copies so that he can start reading the books as well.

The author is unknown, as the author has not been mentioned by name, nor is a name visible on any of the books.

A girl named Lisa, unaware she is a witch, discovers the truth and begins to explore her capabilities. Apparently, everyone in the Spirit Morph Saga universe has a familiar, or "spirit companion"; Lisa's is a talking falcon named Archimicarus. Throughout the saga, Lisa quests to find her father after he is kidnapped by a mysterious unknown one-eyed man. The series ends with Lisa and Archimicarus getting married, after Archimicarus transforms into a human.

Lisa is the main protagonist of The Spirit Morph Saga, and is known for her heroism and use of magic.

Originally, she is unaware she is a witch. She gains a black eye-patch sometime during the series.

Plinkman is Lisa's father, who dies sometime before the fourth book.

Archimicarus is Lisa's talking falcon, her familiar (or "spirit companion"), who becomes human and marries Lisa in "Destiny's End". 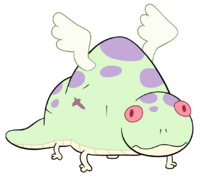 The Wind Lizard is a character that appeared first in "Open Book" as one of the characters Steven imagines in Rose's Room.

The Wind Lizard, appearing in Destiny's End, is said to live in the mountains. Whenever it opens its mouth, it makes a muffled screaming sound.

The Wind Lizard has a heavy build, four slender limbs and two bird-like wings branching out from its camel-like back, it has two big red eyes with crimson red pupils, with several purple spots scattered on its body and head, along with scratches and a cross-shaped scar.

The Unknown One-Eyed Man is a main antagonist of the series.