After Bismuth is unbubbled in the Burning Room, she reveals the names of several bubbled (and presumably corrupted) former Crystal Gems that she recognized.

In Steven's dream flashback, Blue Diamond mentions a Kyanite colony, though whether she was referring to a planet called Kyanite or a planet that produces Kyanite Gems is unclear. The silhouettes of unknown Gems can be seen surrounding and staring at Steven during his dream. Inside Yellow Diamond's bubble chamber, there are a number of unknown bubbled cluster gems. There are also yellow Sentient Bridges (presumably Gem-powered objects) seen leading to Yellow Diamond's bubble chamber and on the bridge Yellow and Blue Diamond land on during their fight.

An unknown blue Gem is shown to be uncorrupted when Steven and the Diamonds combined their powers at Rose's Fountain. She is short and has spiky blue hair. She can be seen happy to be uncorrupted, having a conversation with Snowflake Obsidian. While this unknown Gem resembles the corrupted form of the Ice Monster, they are not the same Gem type (as the Ice Monster's appearance when uncorrupted is vastly different).

Also at Rose's Fountain, a Gem with thick brown hair can be seen from behind talking to the healed Snow Monster, but no other details of her are shown. 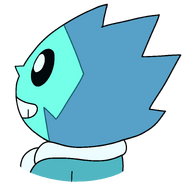 During the broadcast of Steven's message, many unknown Gems are gathered in a crowd at the Diamond Palace. On an unknown planet, several unknown Gems can be seen viewing the message from Steven on a beach, including two gems resembling Aquamarines, and an Era 2 Peridot.  On another unknown planet dominated by a large city, a group of Gems are watching Steven's message from a balcony. This group includes two Zircons, a Holly Blue Agate, Gem that's presumably a Lapis Lazuli, two Topazes, a Jasper, a Ruby, a Pearl, and two Peridots.

A blue-and-red Gem that appears to be a fusion (of an Aquamarine and some type of red Gem) is featured in the villains' roster. 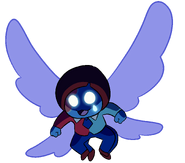 A Red-Blue gem.
Add a photo to this gallery

Retrieved from "https://steven-universe.fandom.com/wiki/Unknown_Gems?oldid=1852602"
Community content is available under CC-BY-SA unless otherwise noted.