Unknown Gems are Gems who have been visually shown through holograms, drawings, named, or other methods. They, or their Gem type, have not been officially identified. 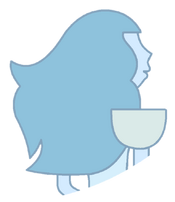 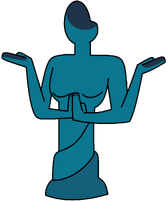 In Steven and Jamie's play, "Beach City or Bust", props for a Crystal Gem fusion and Corrupted Gem Monster can be seen. Not strongly resembling any other fusions, this is a fusion between some (or all) of the Crystal Gems. This fusion fights off a Corrupted Gem resembling both the Centipeetle Mother and the Big Bird.

There are holograms of many unknown Cluster Gems in The Prime Kindergarten Control Room in "When It Rains".

A Gem, presumably a Bismuth, that is shown poofing Lapis during a Rebellion flashback.

There are a few unknown Gems featured in Centipeetle's flashback.

These are the "other Crystal Gems" who were mentioned by Bismuth, except for Nephrite, who is most likely a Homeworld Gem. They appear to be her close friends. Their statuses are unknown.

Another Corrupted Gem can be seen in a cage. Only its two eyes and large six-clawed hand can be seen.

When Steven is adjusting the Roaming Eye's form calibration system for the Crystal Gems, a small type of Gem, possibly Aquamarine, can briefly be seen on the panel, which subsequently alters the Crystal Gems' forms to be small.

A number of Rose Quartz gems appear bubbled in a room of Pink Diamond's Zoo.

They are also mentioned on "The Trial" by the defending Zircon, who states that there were none in Pink Diamond's entourage or her guard during The Rebellion before her demise, due to a Rose Quartz being seen as a threat.

The defending Zircon states that Pink Diamond's entourage was composed of several Agates, Sapphires, and her Pearl.

Various pieces of old statues can be seen at the beginning of the episode. One appears to be a fusion of two unknown gems, while the head of a large statue has a gemstone with the same cut as a Rose Quartz's on its forehead.

A group of sixty-seven elite Citrines is mentioned by Emerald to have guarded her fastest ship, the Sun Incinerator, on the docking bay of the planet Klavius 7. Lars and the Off Colors are able to successfully sneak past all of the guards in order to steal the ship. Emerald also mentions that one of the crimes Lars and the Off Colors are accused for is impersonating imperial officers in a cosmic jubilee.

In Stevonnie's dream, the name shown on Dr. Maheswaran (who represents Yellow Diamond in the dream)'s phone, is Nephrite-XJ Cut-763. She seems to have been reluctant to begin colonizing the planet due to the presence of organic life, causing Yellow Diamond to demand her to do her job, threatening to shatter her and her crew herself otherwise. According to the silhouette on the phone, she has spiky hair.

Yellow Diamond also attempts to contact the leader of the fleet, however Pink Diamond interrupts her, so the leader's name and appearance are never shown.

There is an unknown Gem from Steven Universe: Attack the Light.
Diamond Fusion.PNG
Statue where you can buy objects.
ObelishSpriteWithBackGroundSpaceATL.PNG
Statue when activated.
ObeliskFlashingItemsATL.GIF
Steven's Items for sale from the statue.
Add a photo to this gallery

Gems mentioned to be Citrines by Garnet can be heard guarding a door on Hessonite's war ship, but they're not seen. The same Cirtrines believe the sounds they're hearing are the result of a Nephrite drill.

A photo depicts a Fusion Gem-inspired ballerina ride.
Add a photo to this gallery