Blue Diamond mentioned a Kyanite colony. Yellow Diamond mentioned two gems named Mica and Stone. Five unknown types of Quartz gems can be seen in Rose's Fountain after having been healed from corruption. They all have different colors, skin patterns, and horns on their heads which they retained from when they were corrupted.

A Gem with thick brown hair can be seen from behind talking to the healed Snow Monster, but no other details of her are shown. There is also a very large Gem talking to the healed Ice Monster. She has grey skin and a white shooting star-like shape over her right eye and right arm, as well as a circle of pointed white hair surrounding her face and a black and white short-sleeved top. She somewhat resembles a Snowflake Obsidean 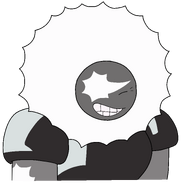 Retrieved from "https://steven-universe.fandom.com/wiki/Unknown_Gems?oldid=1781389"
Community content is available under CC-BY-SA unless otherwise noted.