Additionally, a Bismuth is shown poofing Lapis in her flashback. Unknown at the time, this Gem was confirmed to be the Crystal Gem Bismuth by Rebecca Sugar at San Diego Comic-Con 2019.[1]

Bismuth, then an unknown Gem, poofing Lapis Lazuli.
Add a photo to this gallery 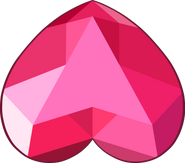 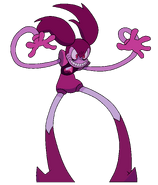 Other unknown Gems can be seen viewing a message from Steven, including the uncorrupted Heaven Beetle and Earth Beetle (presumably) and a Gem that appears to be a Peridot. Many other Gems are in a crowd watching Steven's message in the Diamonds' court.

Retrieved from "https://steven-universe.fandom.com/wiki/Unknown_Gems?oldid=1823772"
Community content is available under CC-BY-SA unless otherwise noted.