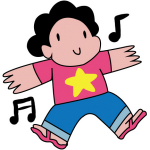 "Live on! Don't waste time on your mistakes, big or small. I know you can do it! Life isn't worth moping around for. Life is worth living. Have fun, you will do great!" -Me

An apartment near downtown Austin

Hi! My name is Ashley and I'm a pretty avid fan of Steven Universe. I find it both cute and If you want to see my art, search "so-soart" on tumblr! Thanks for reading!

Okay, yeah, another Gemsona. Soooo exciting. Obviously, you don't have to read this. It's whatever.

Rhodolite Garnet, who usually goes by Rhode, was one of the successful forced fusions on Earth. She escaped Kindergarten and traveled to Texas and decided to use her mind-reading powers to gain some money and act like a regular human being. She actually thinks that she's a human being, and tries not to remember Kindergarten or think about it, because she doesn't want to try to apply the logic of where she came from with her being a human a lot. As for her gem, she just likes to think of it as her "gimmick."

She often tries to hide her extra limbs (since she was mostly successful, it's usually just an extra finger or something) and has sometimes even tried to cut them off, but when she does, she blacks out and seems to have reformed the extra body part.

She does have mind reading powers, but she doesn't like to call it that. To her, it's the whispers in other peoples' minds that become louder he more she concentrates.

I love almost anything that comes from Nintendo, and my favorite series is TLOZ. Favorite game? Wind Waker. It's my childhood Zelda!

I also like Pokemon, and although I wasn't into Pokemon during the first and second generations, those are my favorite. My favorite game would have to be FireRed.

Retrieved from "https://steven-universe.fandom.com/wiki/User:0Game0Time0?oldid=573533"
Community content is available under CC-BY-SA unless otherwise noted.