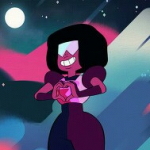 Hi I'm 111a111 and I do stuff on this wiki. This is my favorite wiki. I'm a big fan of both SU and Adventure Time. I like other cartoons like Gravity Falls etc. but those are my two faves.

I'm currently ultimately obessed with thisssss Steven Universe I hope you already guessed who my fave gem is... that's right! It's GARNET!!!!

Retrieved from "https://steven-universe.fandom.com/wiki/User:Gaarnet?oldid=992866"
Community content is available under CC-BY-SA unless otherwise noted.