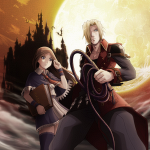 I think that they are my friends but you have to ask them if I'm a friend of his/hers/its.

Let's be sincere: what manic person will affiliate with such a moronic and meaningless weakling?

Somewhere, Beyond the Sea (Don't confuse with Somewhere, Over the Rainbow. That's waaay too far).

In nightmares, using a gray tuxedo, poking the dreamer with a car antennae and laughing

I'm JohnRDVSMarston. That's all you need to know (but if you want to know more, just ask).

Let's be honest: There's no redemption. Nor cure. The only thing a pathetical excuse of a man in a statis of his can offer is its amazing monotony that fills the depths of the mind of everyone around him, sucking all that is in there and only making a void stay at its place...

After all, at the end, it will be one way or another: Shooting the mirror and diving into the abyss of solitude and agony; or getting up, face the darkness and release the Enclosement upon the traitorous bastard until you got a sactisfaction smile of it.

...But that's life. That's what everyone is, will or already have experienced: a showdown against yourself. Fortunately some made up alright, but others kicked the bucket. Wheather they were brave or desperate is debatable... However it is noted that some people just won't have the 'click that changes'...

Retrieved from "https://steven-universe.fandom.com/wiki/User:JohnRDVSMarston?oldid=1452389"
Community content is available under CC-BY-SA unless otherwise noted.