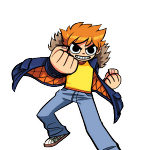 Hi!, welcome to my profile page, i'm an user from the wiki!

My favourite gem is Centi (and she is finally healed and happy with her crew :DD), i really liked her in "Monster buddies", one of my favourite episodes from early seasons, along with "Steven and the Stevens"

Btw, i'm not doing theories for a while, i will comment some threads and enjoy the show

Almost everything was proven false... sad

This is a list of the threads i have made in the wiki; i took the idea from LapisLazuliisthebest (an user who has really good theories), it also contains some stuff i believe could happen in the show (with a parenthesis telling if it was proved wrong or false), i put it just to show off btw :v

Stuff about Sapphire's weapon: (related to this thread (not mine))

Stuff about Lion (related to this thread (not mine))

Stuff about the "I am my mom - Wanted" arc

Stuff about the diamonds (or related to them)

Stuff about Pink Diamond (or related to her)(i guess everything here was proven false (too lazy to check))(i really liked my fanfics btw :3)

The 3 fanfics are really cool though

Retrieved from "https://steven-universe.fandom.com/wiki/User:Jolmev?oldid=1929124"
Community content is available under CC-BY-SA unless otherwise noted.