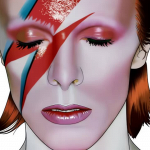 “'Ashes to ashes.  Funk to funky.  We know Major Tom's a junky - strung out on heavens high, hitting an all time low.” Bowie aside, I'm mostly in it for the smart-alecky remarks. Love Steven Universe series 1-4.  5 onwards is fine, but my true love is Series 1.  Steven and the Stevens might be the funniest bit of sci-fi I've ever seen. I've a fair track record of small, incremetal improvements to the wiki (spelling, readability, that sort of thing).  Other than that, I'm a trans woman (she/her, please). Gender-Q. I've done some acting.  Some comedy.  Some software.  I play piano, the Q-chord and the ocarina (none of them well).  I sing marginally better.  Look younger than I am (thankfully) though I still look at least 30.  LGBT (Q to the nth degree).   I can carry most things - I'll carry a tune, carry your luggage, Cary Grant, cash-and-carry and even hare kari if you show me how... but I will not carry a gun.  Something of a dumping bin for pop culture.  Vegetarian, but an advocate of saying 'mmm steamed hams'.

Retrieved from "https://steven-universe.fandom.com/wiki/User:Ke2083?oldid=1900171"
Community content is available under CC-BY-SA unless otherwise noted.