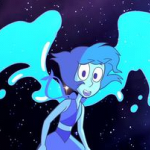 Hi! I am LapisLazuliisthebest. I chose that name because Lapis Lazuli is my favourite character in the whole show.

I mainly joined this wiki to share some theories that I've been working on.

Why I think Sapphire doesn't have a weapon (Practically confirmed)

Why Pearl has a weapon (unneeded)

The identity of the Unknown Fusion Gem (disproven, turns out it's obsidian)

Sugilite is not unstable. She is super-stable

Theory about Peridots ferrokinesis and other Gems hidden powers

Why Pearl has a weapon (revised version) (half-confirmed, though Pearls spear was probably an upgrade from The Reef and not a hologram)

Why Garnet has a visor

The Purpose of Rutiles on Homeworld (not disproven, just not what I think anymore)

Theory about Rose's shield (Given what we've seen with Pink Steven, I'd say this is mostly confirmed. Though probably has nothing to do with Bismuth)

The Beginning and End of White Diamond (the part about her being dead, disproven)

[|Idenity of the new Gem] (disproven)

Retrieved from "https://steven-universe.fandom.com/wiki/User:LapisLazuliisthebest?oldid=1917088"
Community content is available under CC-BY-SA unless otherwise noted.