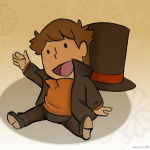 I'm Layton54ever10, otherwise known as TopHatLycanthrope or by my Gemsona, Emerald.

She is a Beryl Type gem (which in my head canon are workers or soldiers that are much more small than quartzes) created in Earth. She joined the Crystal Gems since she adored the planet too much, but feared everything that seemed dangerous to her. She is afraid to make someone angry, wether it was an accident or not.

Retrieved from "https://steven-universe.fandom.com/wiki/User:Laytonfan4ever10?oldid=1251062"
Community content is available under CC-BY-SA unless otherwise noted.