The Water Bear is a formerly-corrupted Gem that made her debut in "Love Letters". She was healed and uncorrupted in "Change Your Mind".

The Water Bear has a light-blue, barrel-shaped body with three similarly colored pairs of short stubby legs on her sides. Each leg is equipped with four finger-like appendages. Her entire body mass, aside from her gemstone, is composed of a gelatinous substance. Her gemstone is located on her face and resembles a single eye. The gem is lavender-violet.

Upon being uncorrupted, she reforms with a more humanoid form. She has her gemstone pointing outward on her head. She has no visible mouth, and she seems to be slightly transparent and gelatinous.

In "Love Letters", the Water Bear presumably attacks Garnet during her search for Malachite in the ocean, and is brought up the surface. For unknown reasons, she is thrown back into the water instead of being poofed and bubbled. 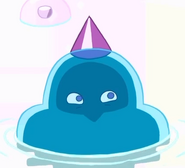 Add a photo to this gallery
Retrieved from "https://steven-universe.fandom.com/wiki/User:PaintspotInfez/Water_Bear?oldid=1851565"
Community content is available under CC-BY-SA unless otherwise noted.