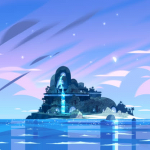 Aquamarine is a Crystal Gems who fight for Earth and trapped under an injector in the Beta Kindergarten for 5,000 years.

She has cyan-blue skin, and thick, wavy, light blue hair. Aquamarine has a lean, toned body with a pair of arms. Her face is thin and rounded with a pointed nose just like Pearl. Her gemstone is on her head. She wears a navy blue top and navy blue, knee-length leggings, and navy blue shoes. She wears a sash with a drape in front and back that went down to her shins, featuring an accented star at the base.

Aquamarine always serious in every situation. But sometimes, she was very emotional, very mad at her enemy, and catch a joke. Aquamarine is always fair to all people around her. She also very talented when she trained the gems.

Aquamarine acts as Blue Diamond's bodyguard and servant also was her most trusted Aquamarine.

She along with Garnet joined the Crystal Gems, and fight in the rebellion and became Crystal Gems' trainer for preparation of the rebellion. When she was tasked by Blue to guard a powerful staff, she saw Pearl and Rose attacked the Cloud Arena and began to think, why they want to be traitors to their homeworld. After the attack, she decides to quietly betray Blue. As soon as she finds out that earth is the place where she can be free, she soon brought the staff to Rose.

She trapped under an injector in the Beta Kindergarten after her mission to stop the producing of Quartzes, causing her can't reform.

She helped the Crystal Gem to find Greg by finding another old friend, Nephrite, who trapped in Korea

Retrieved from "https://steven-universe.fandom.com/wiki/User:Pizuliblue?oldid=1891870"
Community content is available under CC-BY-SA unless otherwise noted.