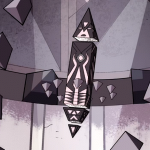 I edit pages and post blogs in the world of Steven Universe. Glad the hiatus is over. Happy New Year

Labradorite flaunts a dark, cyan blue cloak that has a hood with a diamond insignia. She always have her hood on, just as how Blue Diamond does. Although when the hood is brought down, Labradorite's light sky-blue eyes appears, shimmering, and her hair is a frizzy perm that goes down to her feet.

Labradorite, during her guarding shifts, is always seen as cold because half of her face is covered. Although when her hood is let down, Labradorite's eyes tells all. She doesn't smile and only her eyes are expressive. In one of her shifts, Labradorite twinned herself around the colony, each giving them a bow and an arrow to shoot at intruders. This show that she is very strategic when it comes to defense.

Retrieved from "https://steven-universe.fandom.com/wiki/User:UseURname?oldid=1482288"
Community content is available under CC-BY-SA unless otherwise noted.