Well, I did one for Garnet, and now it's time to do one for Pearl I guess. And before you ask if I'm gonna do one for Amethyst, no. Because we all know her backstory. She was made in the Kindergarten and Rose found her, the end.

HOWEVER, where as my Garnet backstory was mostly just made-up, this time I'm gonna make this more like a theory. So yes, another fan theory of mine. Been a while.

Okay, so we've all seen the episodes Sworn to the Sword, AKA Steven the Swordfighter mixed with Rose's Scabbard, and We Need to Talk, AKA Story for Steven with extra salt, right? Well, these two episodes are going to be VERY important in this theory.

So the most popular Pearl theory is that Pearl isn't the only Pearl in the universe. She's one of many mass-produced Gems that were designed specifically to be parts of Gem armies. This started when Jasper called her a "lost, defective pearl" in the episode The Return. However, in that exact same episode, there's also a problem with this theory. Before that episode, it's clear Peridot ratted the Crystal Gems out to "Yellow Diamond" and in return she sent three homeworld Gems to Earth to apprehend them, being Peridot herself, Lapis, and Jasper. ...If there were literally hundreds of Pearls being produced like Skylanders figurines, wouldn't it make more sense to just a bunch of Pearls alongside them?

Now, I have a much smaller version of this theory.

I believe Pearl is the only Pearl in terms of the Gem species, but she has been created not to fight, but to protect. Protect who or what? Take a wild guess. 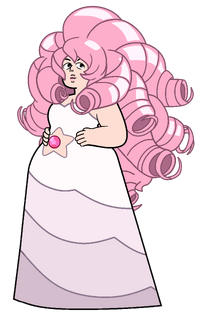 However, I also believe Rose Quartz used to be like a general for the authority or whatever they have on the Gem homeworld. And clearly someone who's important to the authority is going to need somebody watching their back. And thus, Pearl was created. The reason I say "bodyguard" is because, in Sworn to the Sword, she's practically OBSESSED with protecting Rose, so much so that she's living out her fantasies through her son and her son's friend. And I'd like to go one step further by saying that Pearl was treated more like an object than a person because she was created to protect someone. But that someone she was created to protect treated her like an equal and showed her love. And that is why Pearl is so thirsty for pink lemonade.

So yeah, that is my headcanon Pearl backstory. I look forward to hearing your thoughts and impressions.