So everyone's got AUs where the homeworld Gems we've seen so far aren't bad guys and are members of the Crystal Gems, where they're also Steven's mommas and EVERYTHING'S JUST SO HUNKY DORY WITH FRIENDSHIP, SUNSHINE, RAINBOWS, AND LOLLIPOPS! Ahem. Sorry. So um, anyway, I thought I'd run through our "antagonists" if you will and see if any of them can truly become Crystal Gems.

Okay, before we get into Lapis, I just want to say that I know I bad-mouthed her pretty much in my last blog, and I want to explain that I was just venting because I find that Lapis is an extremely overrated character. Like, even more so than Fluttershy. But I don't hate Lapis. In fact, I agree that she's a pretty interesting character that we should look forward to knowing about more. So with that all said, let's see if she's redeemable.

Well, she did try to drown people and stole the entire ocean, so uh, that's not exactly the best start... But to be fair, she was alone in a mirror for thousands of years. And if I was stuck in a piece of glass for a long time with no one to talk to, I'd be a little irritable too. Though I still want to know WHY she was stuck in the mirror in the first place. Did the Crystal Gems deem her too dangerous to humanity, or did they run out of bubbles for Gems at the time? Well, either way, she definitely does seem to show remorse for her actions, and knowledge of right and wrong. Lapis is probably the most likely of the three to be redeemed.

Well, Lapis has a squeaky clean record compared to her. She's made it quite clear that she doesn't really care too much about humans and we've seen she's not afraid to try and kill a child. So again, that's not really a good start. However, Peridot just doesn't seem evil to me. More just a jerk if anything.

It somewhat feels like Peridot's just following orders and doesn't really have that much understanding over right and wrong, almost like she's a newer Gem. Maybe created in the Kindergarten? Now THAT would be a twist! I also think she acts more childish than the other homeworld Gems. I think we all agreed that "I'M REPORTING THIS!" equals "I'M TELLING MOM!".

So yeah. While not as likely as Lapis, I can see it happening. 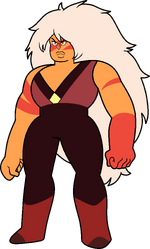 Okay, with Lapis and Peridot, there were at least hints that they don't want to be the bad guy. But Jasper... I think she's made it pretty clear the only person she cares about is herself. And Yellow Diamond, possibly. She shows no remorse for attacking humans (even if she thought it was Rose Quartz), is generally a bully to others, and killed Garnet, even if it was short-lived.

Plus, she's also technically a war criminal. She was in the Gem War, where the Crystal Gems were stopping the homeworld Gems like her from DESTROYING EARTH. She is well aware of the consequences of her actions and doesn't care. And that's what makes Big Buff Cheeto Puff so intimidating... And yet most fan art depicts her as just the bully jock in high school.

So yeah. In my opinion, no chance of seeing Jasper as a good guy.