Props if you get the reference in the title.

I like some others are really hoping for some nice Jasper character development. Currently she is a pariah in the fandom. Lots of people hate her for...seemingly no reason. It's not like other characters have done WORSE things and gotten away with it. Oh wait: 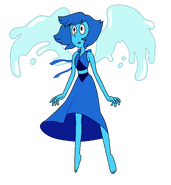 Exhibit B
Add a photo to this gallery

So why is there all the Jasper hate? We know so little about her. I'm not asking for her to redeemed, if that happens I would like it to be arduous and gradual. Considering how easy Peridot and Lapis came to Stevens side, it would be refreshing to get a character that was stubborn and didn't want to change. It would test Stevens abilities in believing in people. Sure some nice person who just wants someone to be their friend is nice and all, but true compassion lies in giving people who are opposed to you mercy.

Let's face it Lapis and Peridot both have an attachment to Steven after they let their guard down. Jasper hasn't really show this need. Lapis was pegged from the start as a friendly. And after Peridot lost all credibility it was obvious where her character was going. But Jasper? We've heard seen her do bad things from day one. Not softening up, not giving any ground, nothing. She has so much potential. I feel like Steven would have a harder time forgiving Jasper and that would be interesting.

Even if she just becomes a villian I would be satisfied. As long as we get to know her better as a person I could say that her character was really important and I was glad she was included. And honestly all the villains with the exception of Jasper are complete jokes. Well maybe not Blue Diamond, but that's a tale for another time.

You might disagree with me on this. Or you might think I have the right idea. Thoughts, my fellow wikia dwellers users?

Retrieved from "https://steven-universe.fandom.com/wiki/User_blog:Gray_Pea_Shooter/Jasper_the_friendly_Gem?oldid=894912"
Community content is available under CC-BY-SA unless otherwise noted.