Warp Pads are teleportation devices created and utilized by Gems. The Crystal Gems are first seen using it in the Pilot, but the Warp Pad had debuted officially in "Gem Glow".

Warp Pads have a crystal-like appearance which resembles the top half of a brilliant-cut diamond. For the most part, they appear blue. However, other colors are possible depending on the surrounding environment.

Warp Pads are activated by the will of the user. This lets out a beacon of light and phases the traveler to the location they desire. In the episode "House Guest", a Warp Pad can also be activated by a Warp Whistle.

Warp Pads can transport their users through another dimension to any location within the dimension the user came from as seen in "Warp Tour". This is proven when the Crystal Gems had to swim back from the Lunar Sea Spire after the structure had collapsed. Seen in the episode "Space Race", the Galaxy Warp is an inactive location housing Warp Pads that transport entities to locations off-planet, with the most notable warp destination being the Homeworld Warp. "Winter Forecast" suggests that with enough focus, a small group of Gems in a circle can warp an object on its own to another location without warping themselves.

It was seen in "Coach Steven" that heavy objects can destroy Warp Pads. Pearl was unable to return to the Communication Hub after it was destroyed by Sugilite. In "Cry for Help", the Gems must use Lion's teleportation ability to visit the Communication Hub since the location's warp pad is broken. The restorative fluid in a Flask Robonoid can repair minor damage to a warp pad, as seen in "Warp Tour".

Warp2.png
In a warp stream.
Warp1.png
The Crystal Gems on a warp pad.

The warp pad in use by the gems.

A fixed Galaxy Warp Pad
Warp Tour (2).PNG
The Crystal Gems at the Sky Spire standing on the warp pad.

The Warp Pad in the Crystal Temple, before the house was built. 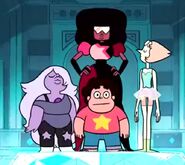 The Crystal Gems carrying Lapis back to the barn.

A Warp Pad in Attack the Light.
Add a photo to this gallery