Attack the Light
Yellow Light (title presumed from dialogue, not official) is a Light Creature released by the Light Prism in the mobile game Attack the Light.

Yellow Light has a geometric and pixilated body, being rectangular and having a very bright yellow color. It also has two glowing white eyes that are square in shape.

Yellow Light is one of the few unfought Light Monsters. It appears in the Lunar Sea Spire. Instead of putting up a fight, Steven carries on a conversation with it. It's a distress signal towards Steven, to show that he is their master, but Steven was unable to understand its language. 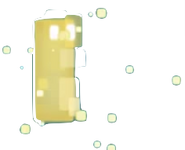 Yellow Light in an absorbed/faded state.
Add a photo to this gallery
Retrieved from "https://steven-universe.fandom.com/wiki/Yellow_Light?oldid=1967256"
Community content is available under CC-BY-SA unless otherwise noted.